Raptors
Chatfield State Park
March, 2020
A pair of Bald Eagles was spotted at Chatfield State Park near the end of March. Since eagles spending time around a nest is a good indication of reproduction having occurred, and knowing that incubation is a likely possibility, I decided to revisit periodically for a one-month period. Not knowing when this particular process began, it may be  longer than one month.  This is the time of year when breeding occurs in the Rocky Mountain region, so chances are good that one to three hatchlings will appear. But, who knows? Maybe there will not be any.

The nest is located along a park road where there is some automobile traffic, but with Covid19 self-isolation in place, the traffic is light. The nest is high above the ground. For observation and photography, I set up my tripod approximately 150 - 200 feet to the east of the nest and far on the other side of the road. I have not seen more than a handful of people approach on the hiking trail well behind me during the two hours I have spent at the site so far each time (three visits to date). A large lake, Chatfield Reservoir, is located much further to the east, perhaps one-half mile or more, but with easy access to the nest as this is a requirement when Bald Eagles choose a nest location. (See photos below)

*Click on any image on the page to enlarge it. Then click left or right to move through the images*
Weeks One and Two:The first two visitations show the nest with one bird sitting and the other on watch. Recently, in Westminster, Colorado in Standley Lake Regional Park, a nest was attacked by an apparently unrelated female Bald Eagle. A recording from a remote video camera, an Eagle Cam, showed the invader pecking at what were considered by officials to be late-stage eggs.The male and female nesting eagles made several attempts to defend against the intruder. https://www.outtherecolorado.com/mystery-intruder-attacks-bald-eagle-nest-live-streamed-from-colorado-park/
____________________________
​
This nest has not experienced any of this drama. But, what a great opportunity to watch wildlife in daily activity this continues to be. 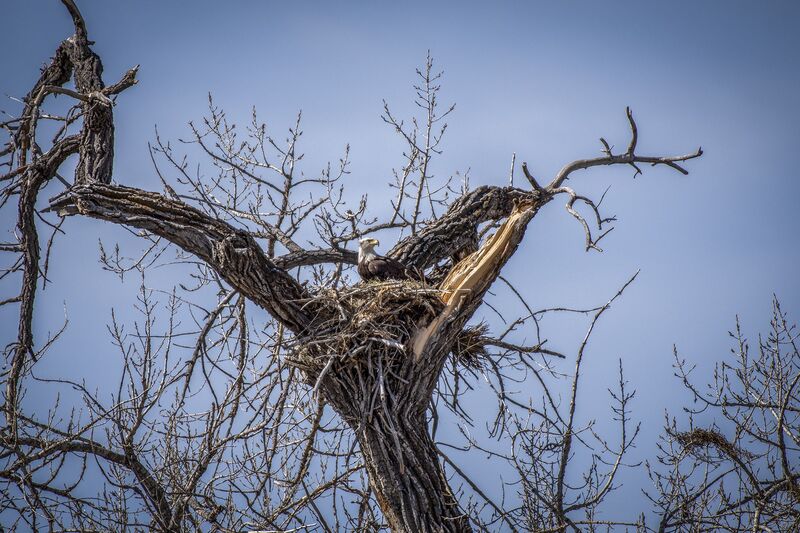 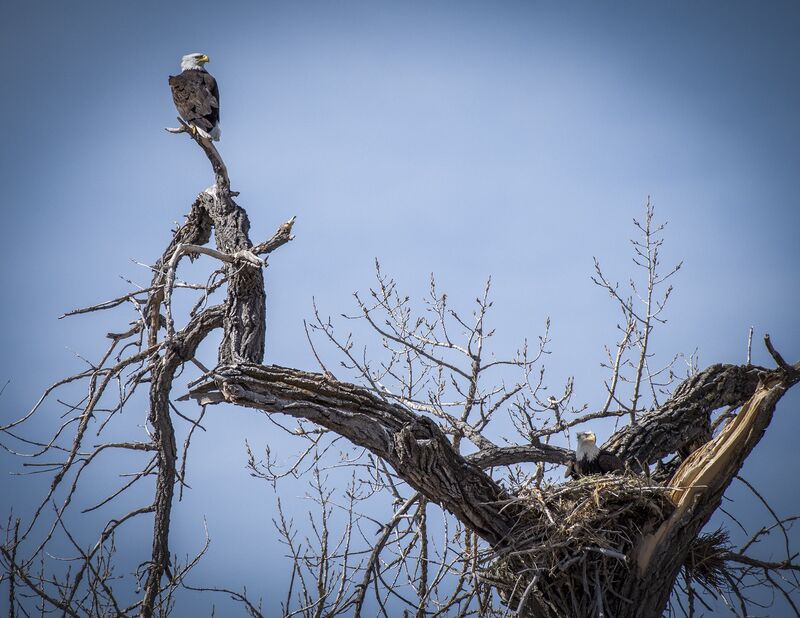 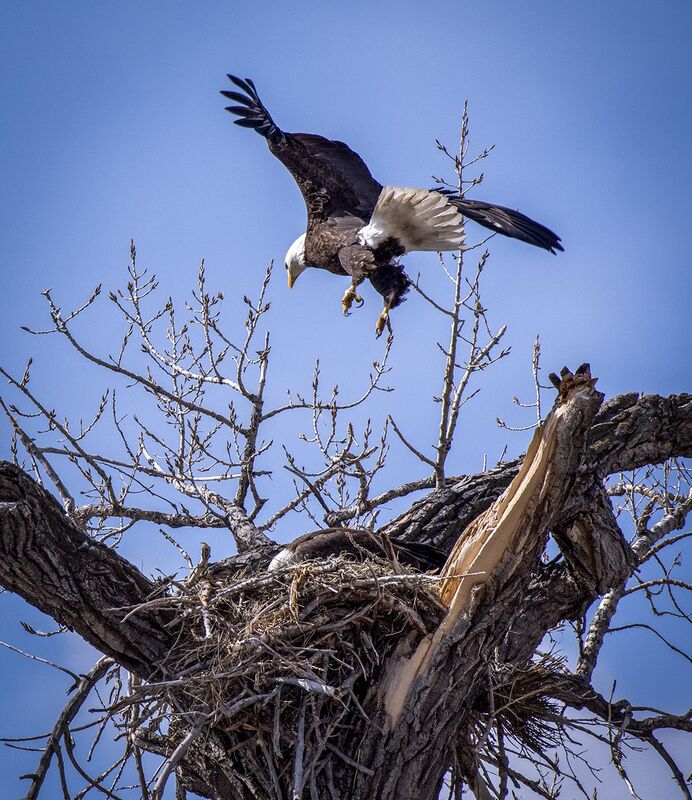 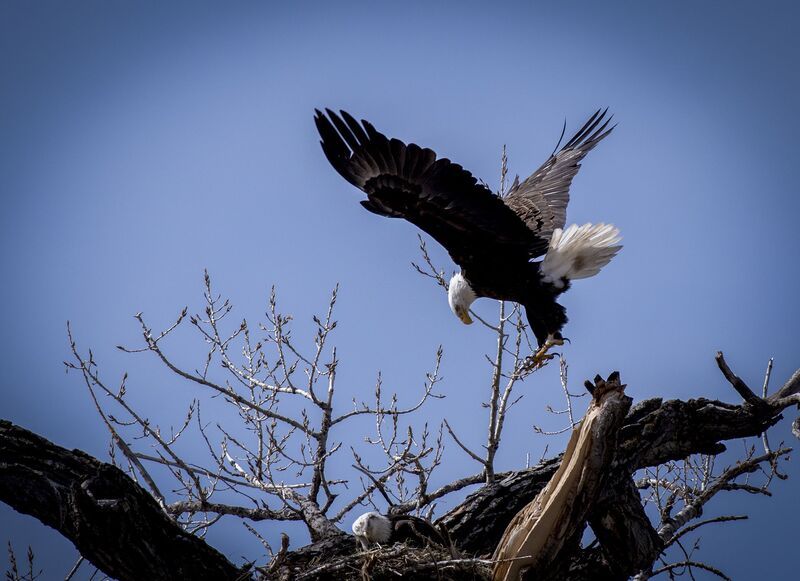 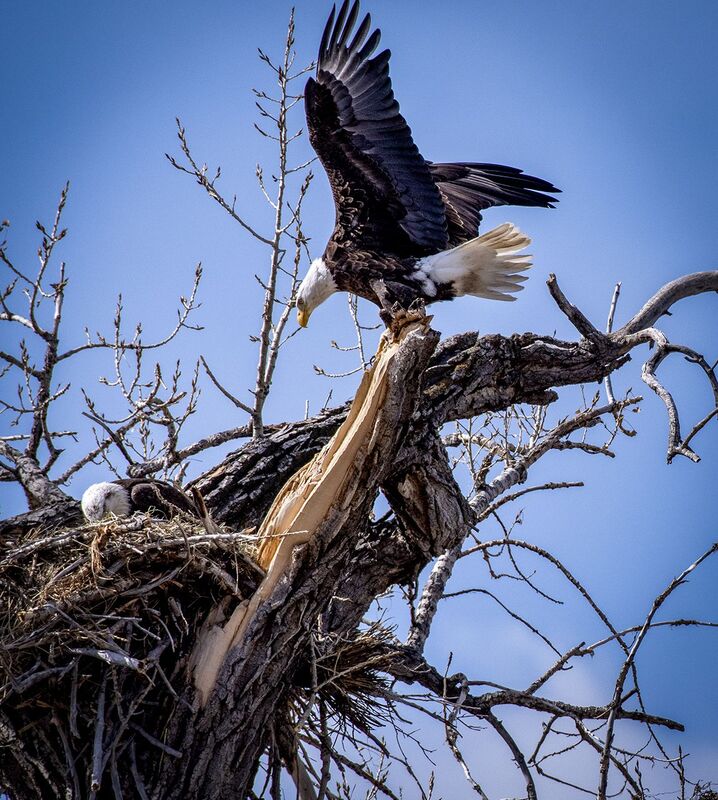 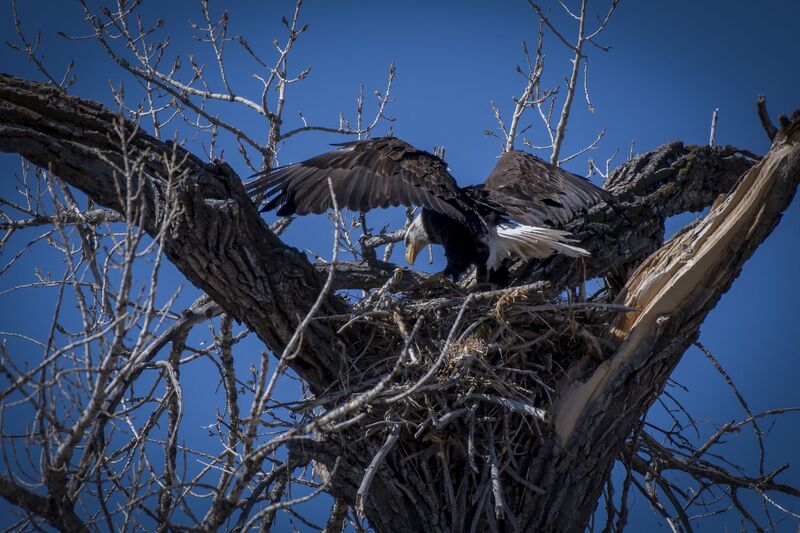 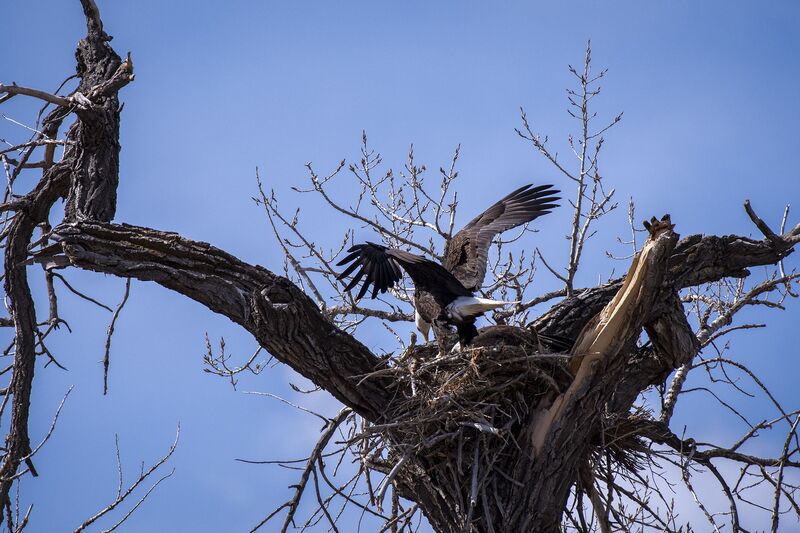 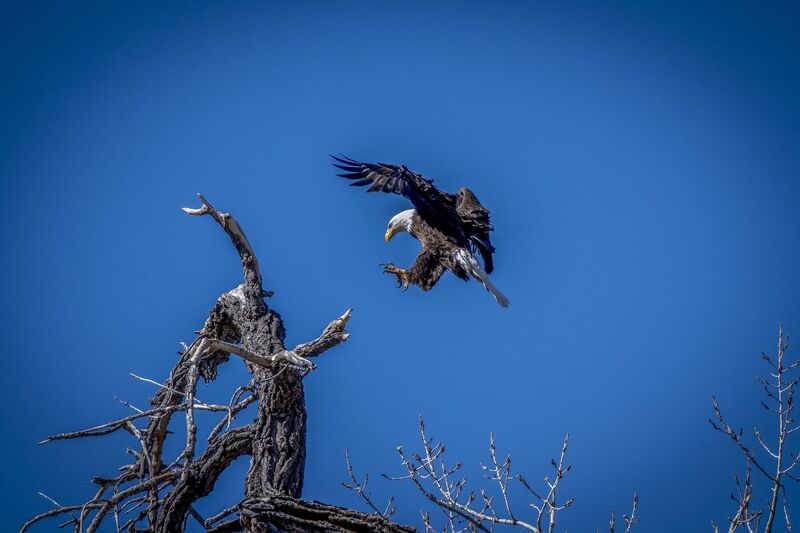 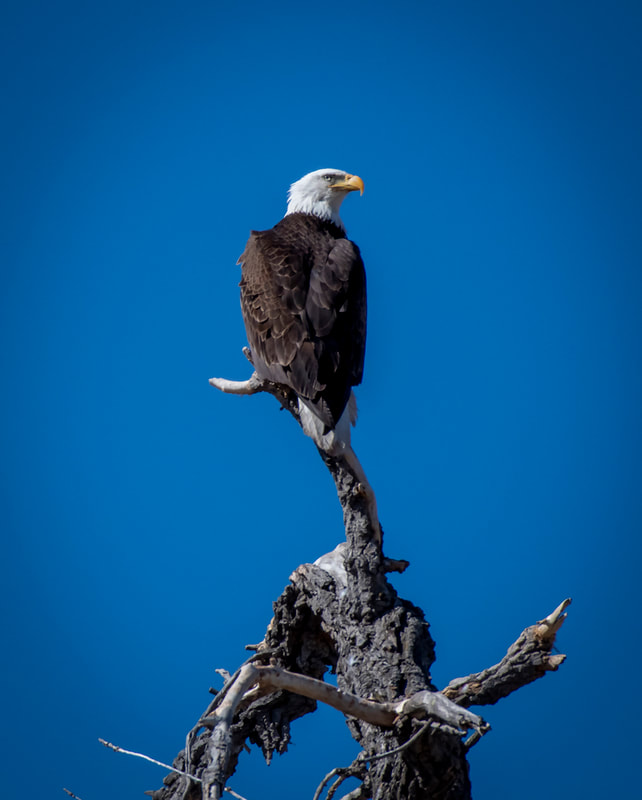 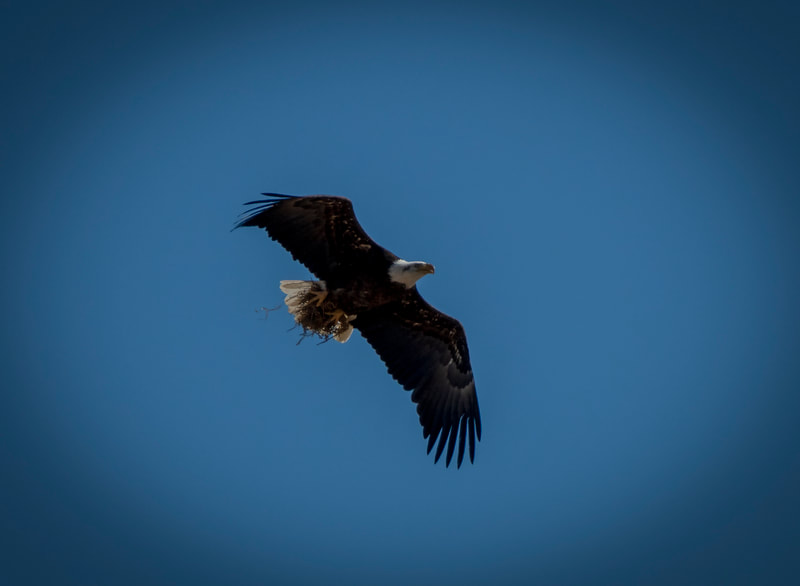 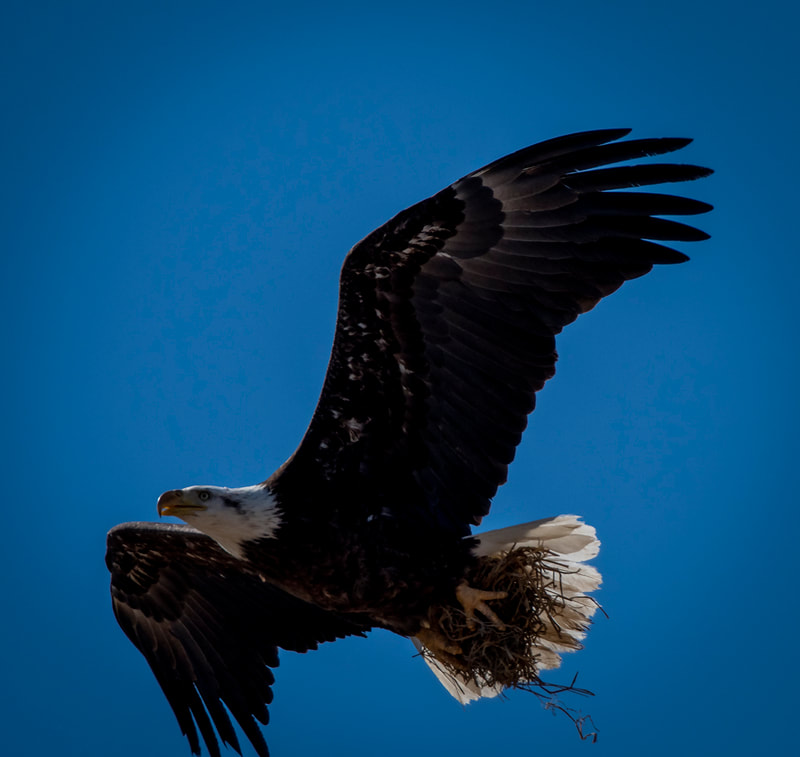 Week Three:  Today's session was short but productive. I set up and within two minute, the activity began. One bird left the nest in search of building materials and a few minutes later returned proudly with a small tree branch which was immediately added to the nest. I was able to follow the bird that left and captured its wing formation in several views. Incredible.
I have added more slide show sequences after the one titled "Landing approach technique". 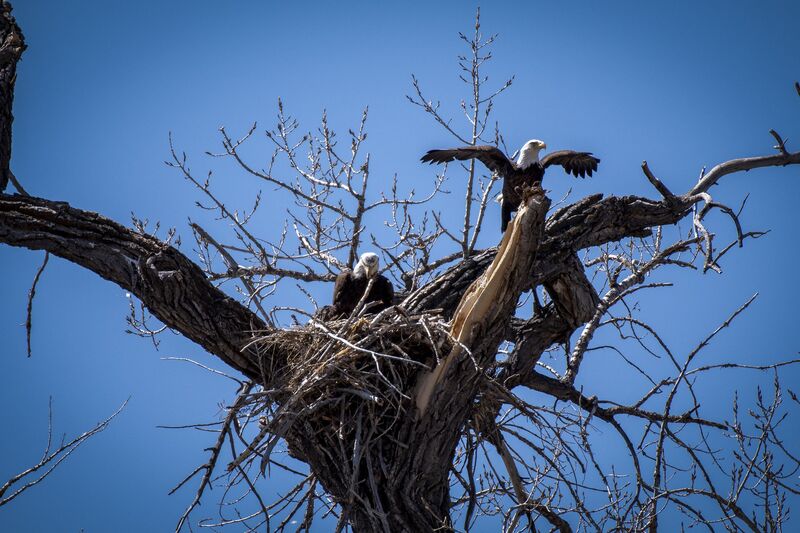 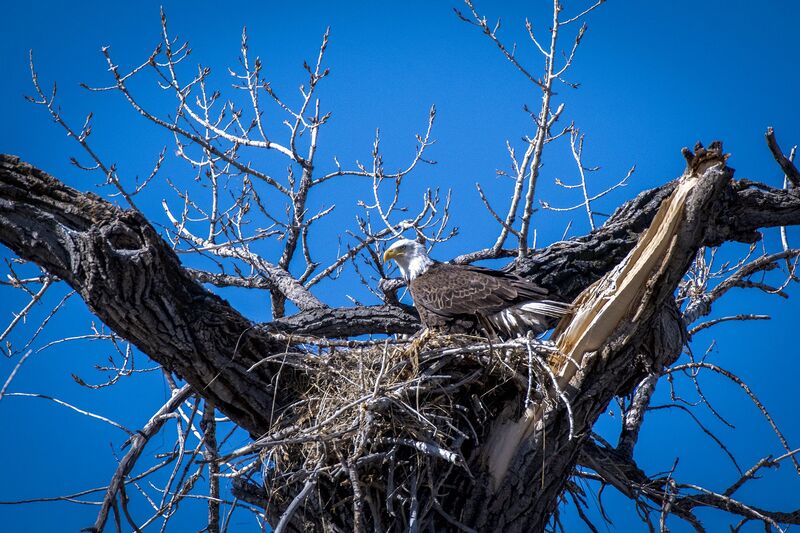 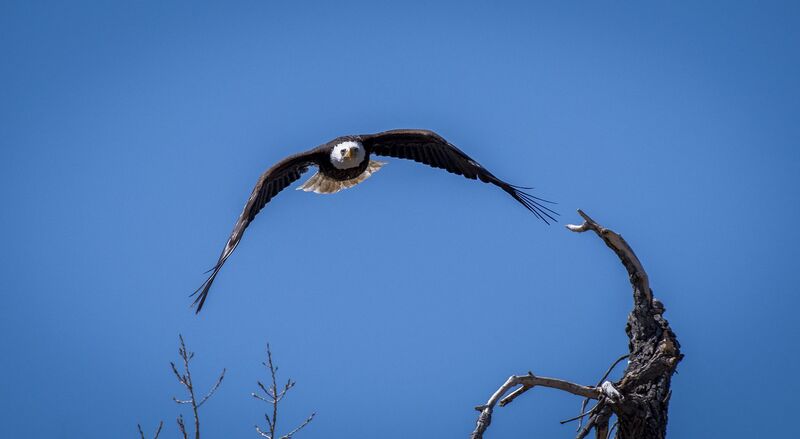 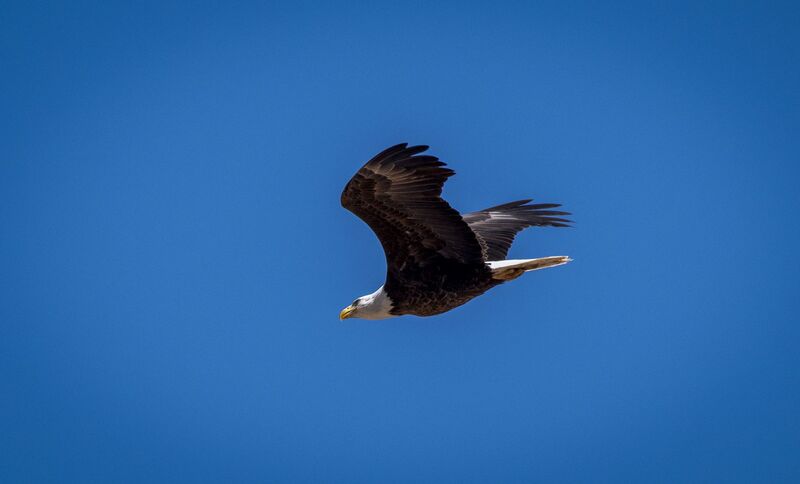 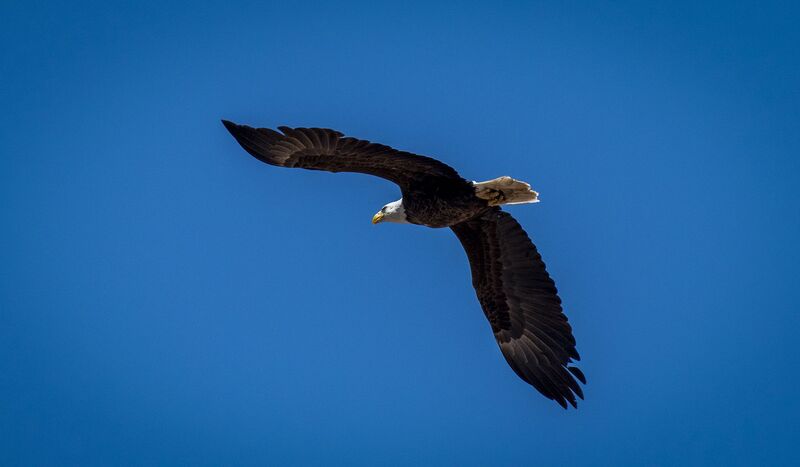 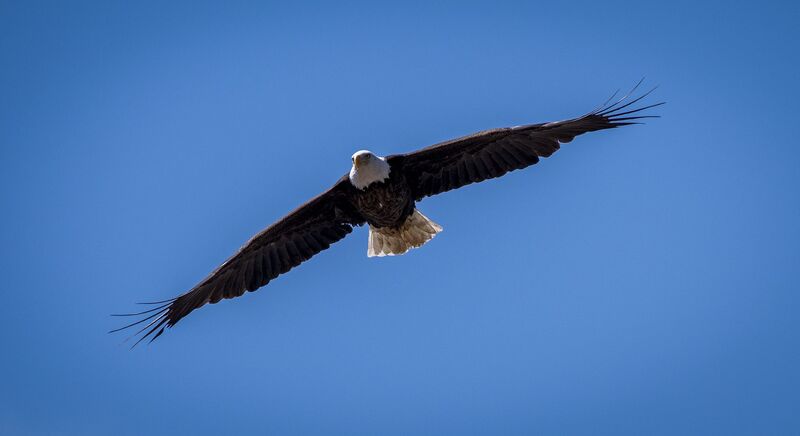 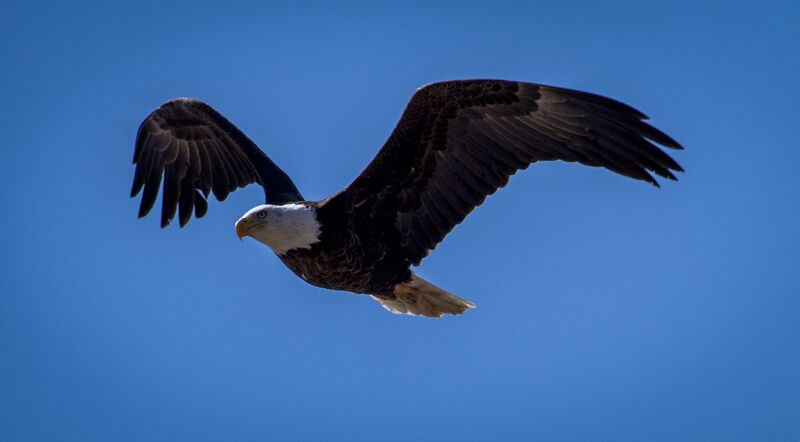 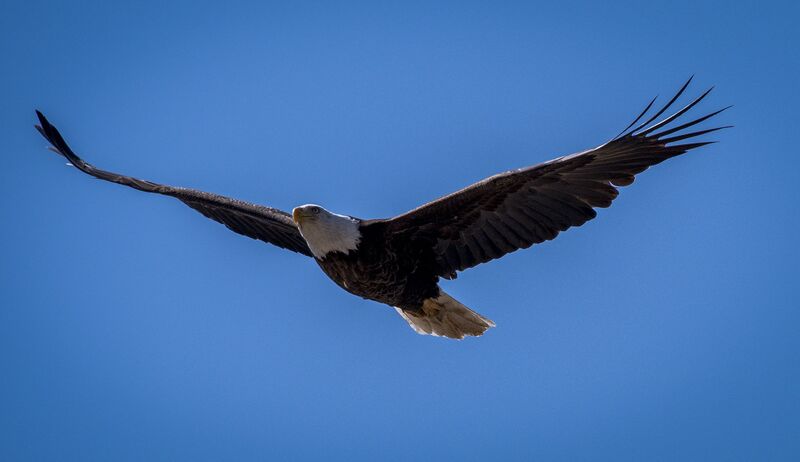 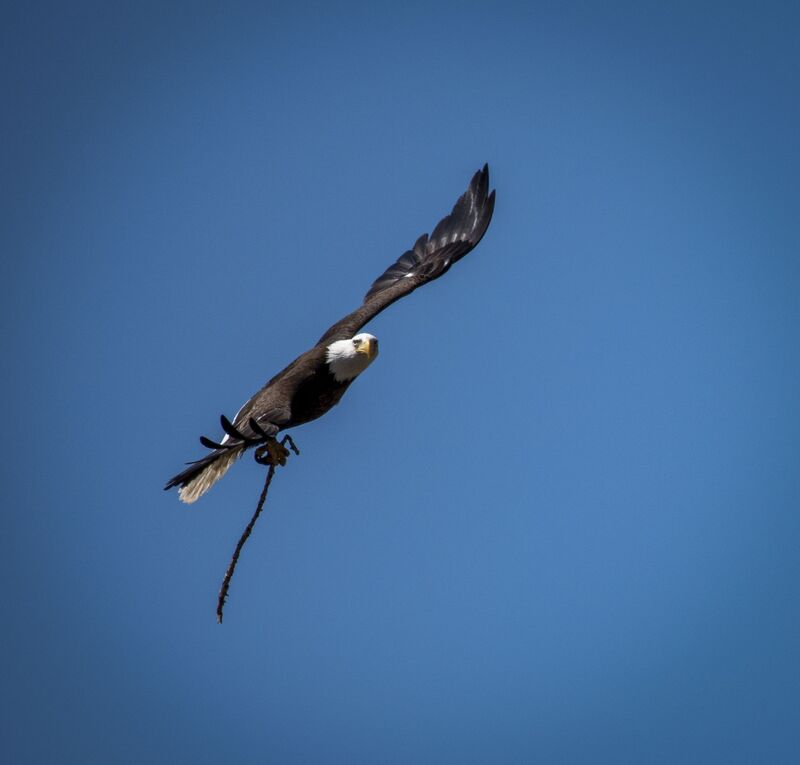 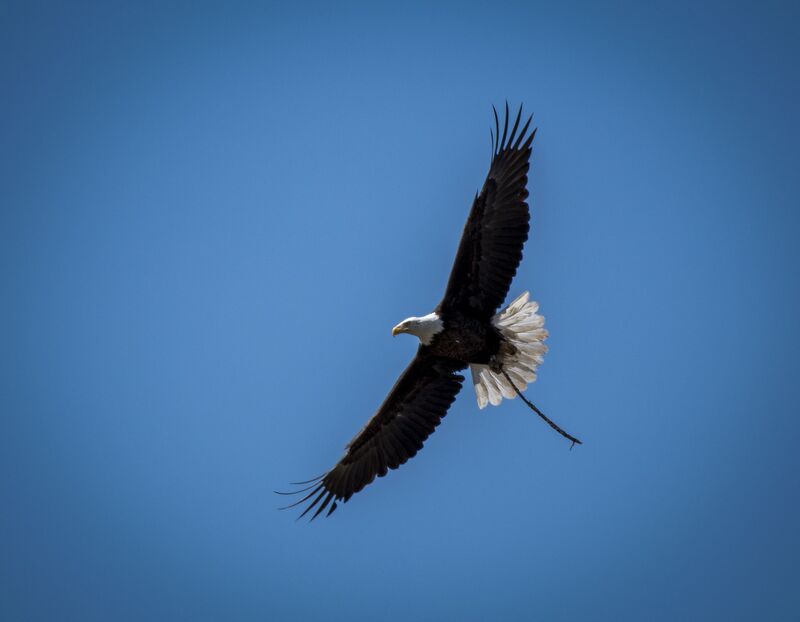 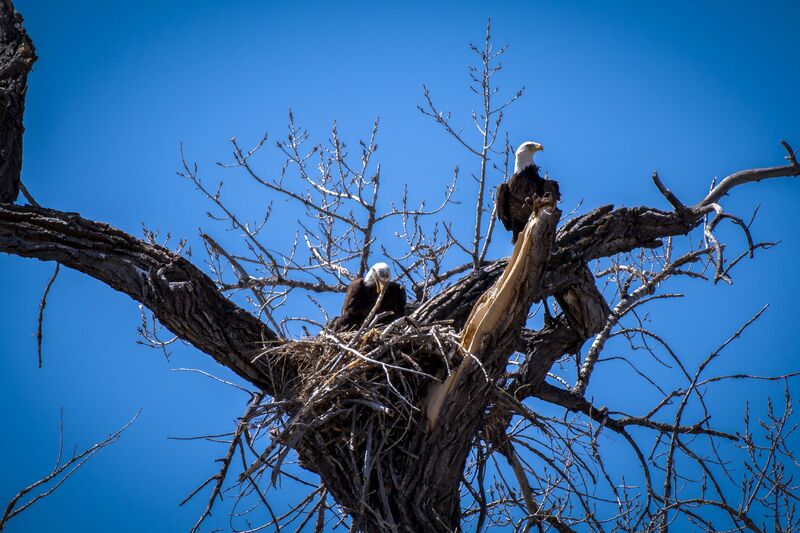 *The sequences run automatically and loop continuously*
Keeping busy while perch-sitting
Bringing nest-building material back to the nest
The process of changing positions the perch
Both are now on the perch and busy making decisions
Landing approach technique
Week Three
Week Four: It was an uneventful day for viewing on April 9, that is, until I was paid a visit by a Chatfield State Park Ranger and learned that Colorado Parks and Wildlife requires a minimal Bald Eagle nest viewing distance of 1/2 mile (800 meters). I believe they are on heightened alert due to the recent nest invasion of a nest on Standley Lake. Susan was with me on this day which turned out to be fortuitous. As we retreated, she asked me to turn around and take one more shot to text to a friend. At that moment the birds decided to move about. The activity as you will see is further away but still exciting. 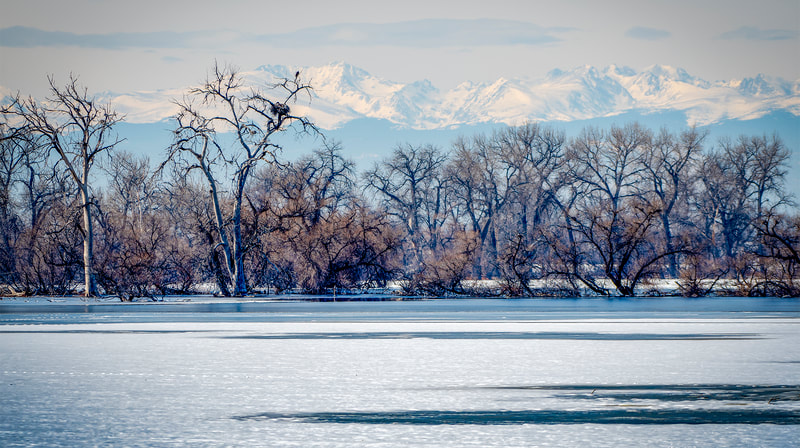 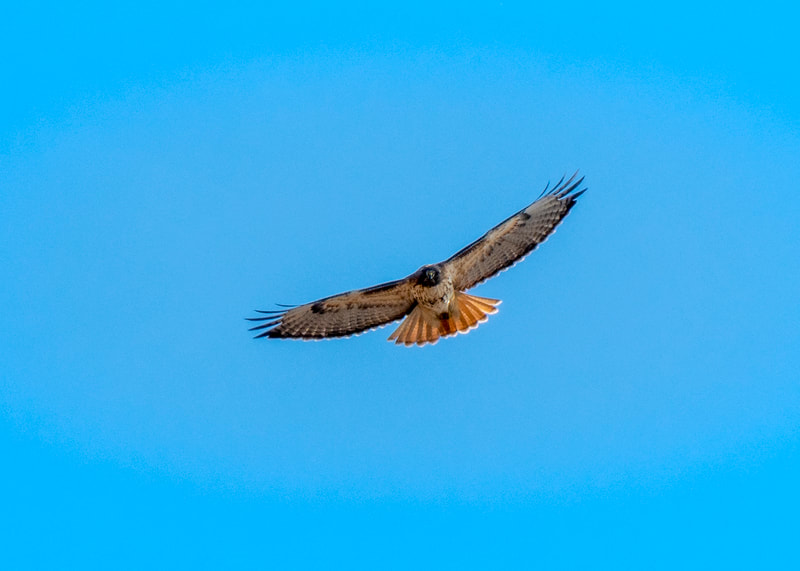 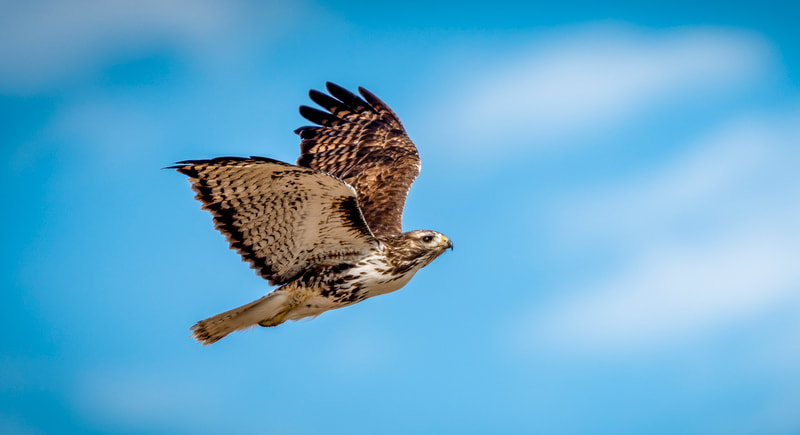 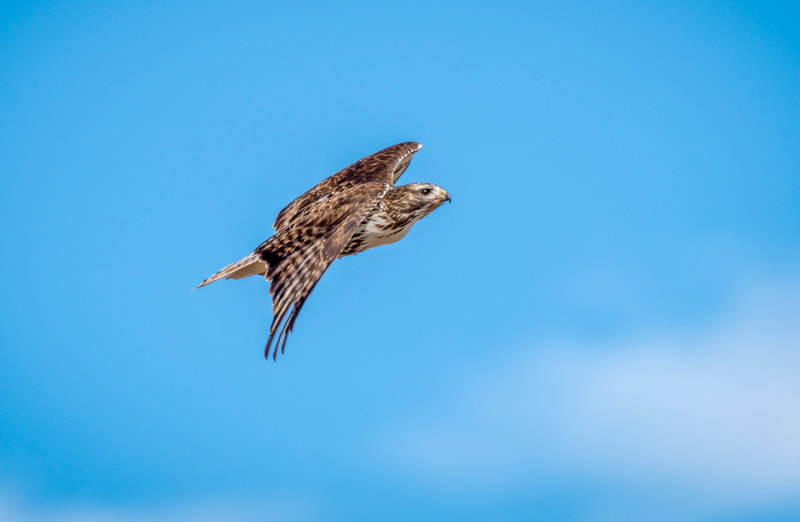 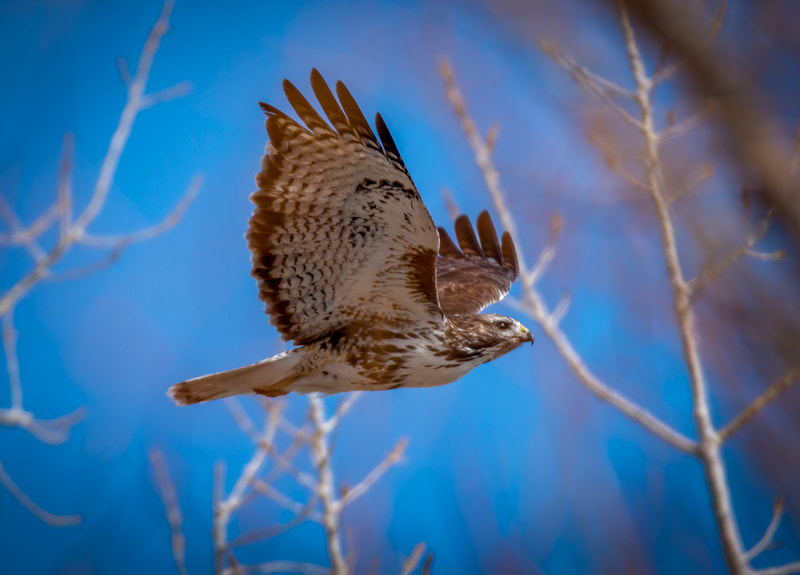 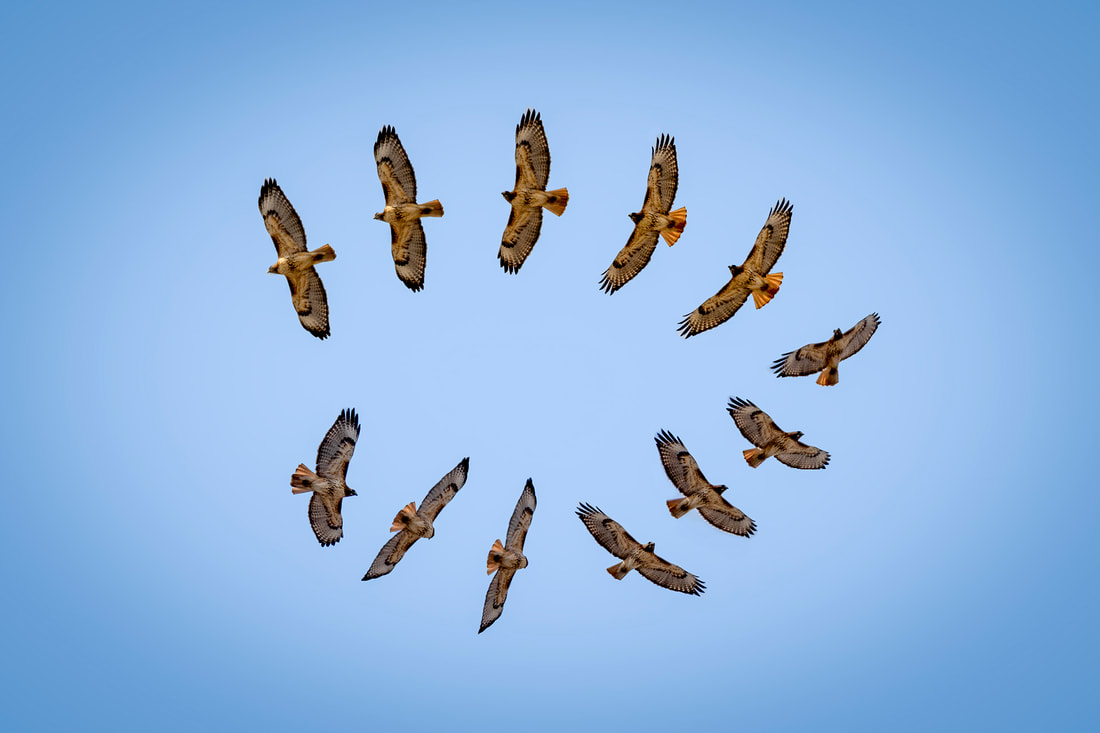